Marvelous sites to local hideaways – The expert’s guide to Toronto

Canada’s largest city spreads out along the northwestern shore of Lake Ontario, and it’s a dynamic, multicultural and inclusive experience like almost no other place on earth. Not only is Toronto a thriving living city,it’s also become one of the world’s truly must-visit destinations. Regularly ranked as one of the greatest places to live, Toronto is the cultural center of the country and home to the biggest events, the most pro sports and the greatest concentration of theaters and restaurants.

Recent decades have seen regular multi-million-dollar upgrades to the city’s public spaces, with a slew of great museums, iconic architecture and the redevelopment of the now glittering lakefront adding to the city’s appeal.

Add in an ever-growing number of world-class hotels, upbeat nightlife that runs from dusk until dawn and a vibrant and diverse culinary scene influenced by the eclectic makeup of the city’s people. Bright and bustling, cosmopolitan and cultured, unpredictable and energetic, Toronto has become one of the greatest cities on earth.

What you see and where you go will depend on the length of your stay. A week is good, longer is better. But even a long weekend will give you a taste of ‘The Six’ — one of the city’s many nicknames, reworked recently as ‘The 6ix’ by one of its most famous sons, Drake.
However long you stay, you can’t hope to see it all. So, consider what follows a starting point for your first visit… 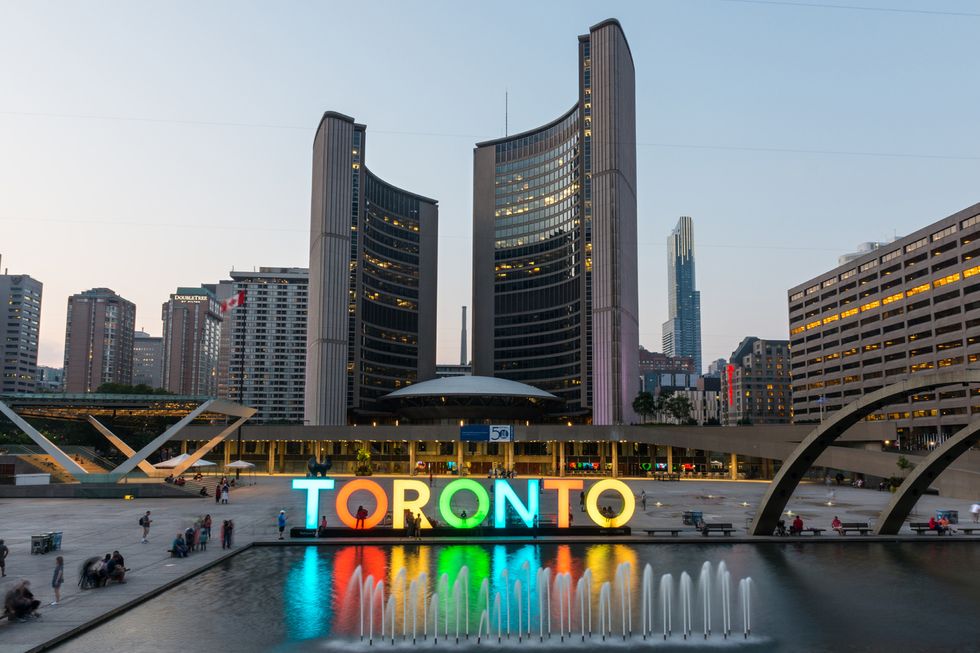 No visit to The Six can be considered complete without ticking off several of Toronto’s true heavyweight sights. All of the following are in or within easy reach of the city’s compact, walk-able and very vibrant center.

The CN Tower is unmissable in every sense, a vast freestanding spire that looks down upon the city and takes its place as one of the ‘Seven Wonders of the Modern World’. Head up for the city’s best 360-degree views, or get your heart racing on the EdgeWalk — a journey around the circumference of the tower’s main pod, 116 stories high and tethered by a harness.

Back on solid ground, Ripley’s Aquarium is almost right next door to the CN Tower and is home to 16,000 aquatic animals and the Dangerous Lagoon. A moving sidewalk that whisks you through a long tunnel surrounded by sharks and stingrays is guaranteed to make your heart race all over again. 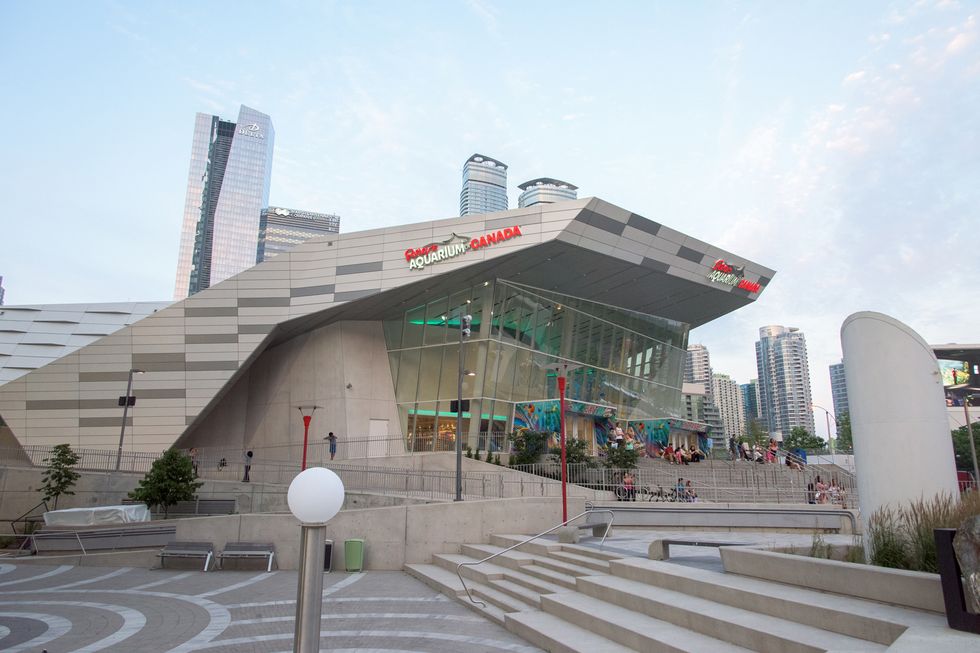 Also close to the CN Tower is the Rogers Center, home to Canada’s only baseball team, the Toronto Blue Jays. Visit on game day for the full experience, or take the stadium tour to go behind the scenes and through closed doors.

In a city of so many museums and galleries, the Royal Ontario Museum stands out. Not just because it’s home to a world-class collection of 13 million artworks, cultural objects and natural history specimens, but as much because it hosts exciting Friday night events that include dance, drink and top DJs.

Two other must ticks include the Art Gallery of Ontario, which houses 95,000 works of art and is free for visitors under 25, and the Hockey Hall of Fame, which taps into Canada’s national obsession in stunning depth. 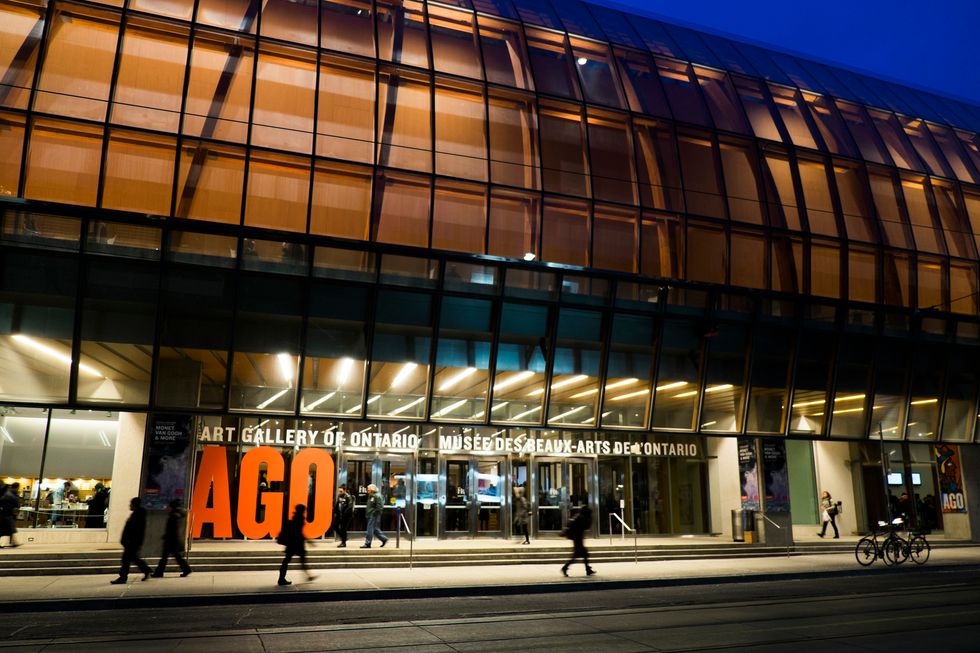 Casa Loma is a must-visit Gothic castle in the heart of the city. North America’s only castle is filled with artworks and treasures from Canada and beyond, but its big pull is the network of hidden tunnels to explore as they stretch out beneath the city. 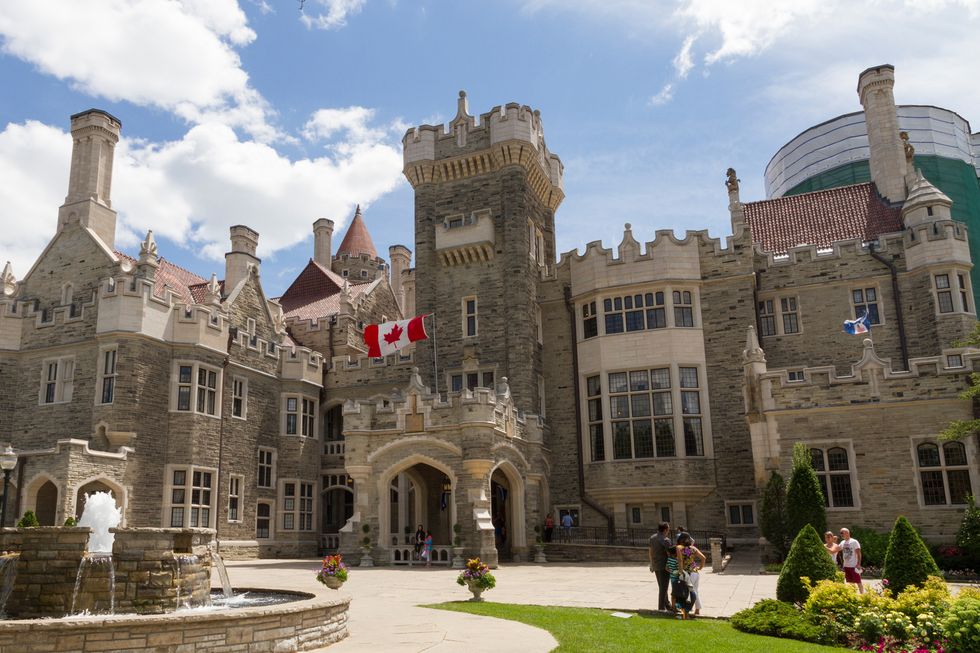 Toronto’s multi-cultural makeup is visible all across the city but reflected best in its remarkable culinary scene (see Where to eat and drink). The city’s ‘fresh and local’ mantra is perfectly showcased at St. Lawrence Market, one of the world’s greatest food experiences. Pay it a visit and grab a peameal bacon sandwich — a Canadian staple invented in Toronto and now considered the city’s signature dish. 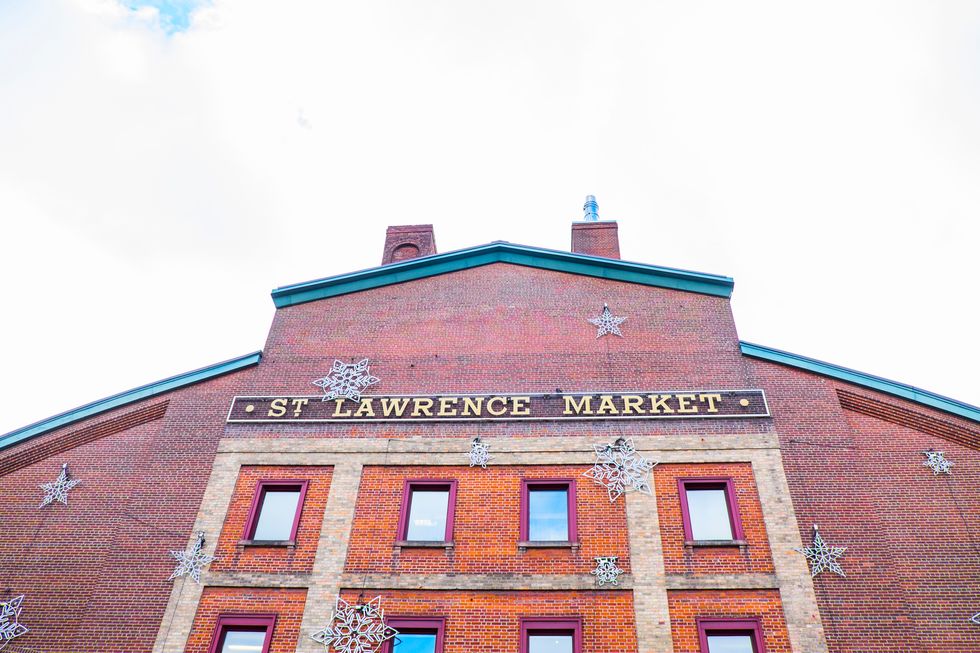 Afterwards, walk off the calories by wandering the historic cobblestone and car-free Distillery District. Once a vast whiskey distillery and an important spot during prohibition, historians mention that even Al Capone would visit the Distillery to load alcohol destined for the States[9] . This iconic landmark now distils creativity within the 19th century buildings now home to hip restaurants, bars, independent boutique stores, galleries and theaters. Visit in December for the Toronto Christmas Market.

Finally, don’t even think about returning home without having had a picture taken with your head poking through an ‘O’ of the multicolored, 3D Toronto sign at City Hall — the most Insta-worthy location in a city of so many. You’ll need to head there early in the morning to avoid the crowds.

If you stay long enough, take a ferry and hop across to Toronto Islands, a chain of 15 small islands in Lake Ontario just south of the mainland. They’re home to beaches, a theme park and a breathtaking view of the city’s skyline and will very happily fill a full day of your stay.

You absolutely cannot leave Toronto without having witnessed the power of the Niagara Falls and its hypnotic mist up close. Trying to visit the Falls from the States is a trip on its own, but it’s almost non-optional when you’re less than two hours away in Toronto. Take the trip, buy the T-shirt and tick off one of the world’s must-see sights.

Away from the sleek, gleaming towers of downtown lie many of Toronto’s less obvious but no less essential attractions. West Queen West is Toronto’s hippest neighborhood and artistic heart, a one-mile strip of very chic galleries, stores, restaurants and boutique hotels. Kensington Market is a fantastically chaotic neighborhood and perhaps the best example of the city’s famous multiculturalism. It’s not a market as the name implies, but a collection of independent shops, vintage boutiques, art spaces, cafés, bars and restaurants from every corner of the globe.

The Bata Shoe Museum is one of the city’s quirkiest collections, an unexpectedly fascinating exhibit that retraces the 4,500-year history of footwear. And as you wander the city, you can’t fail to notice that Toronto’s walls are alive with graffiti. Take a free 90-minute walking tour through the back alleys of Queen Street West and down Graffiti Alley to gain a better understanding of the city’s street art scene. If you visit during the sunnier months, escape the hustle by heading just east of the center to High Park, the green heart of the city where forests, walking trails, picnic spots and even a zoo await you. Ideal to unwind after a long day of urban adventures.

When to go With the sun shining, May through October is a great time to visit, but the city is alive through all four seasons. The Spring and Autumn months are ideal as the humidity and visitor numbers are lighter, while Toronto comes alive through the colder months through a wide array of winter celebrations. One of the most spectacular is the Aurora Winter Festival, a six-week celebration that sees the Ontario Place, West Island transformed into four mystical worlds. Whichever season you choose, plan to stay for at least five nights to get a true flavor of the city. 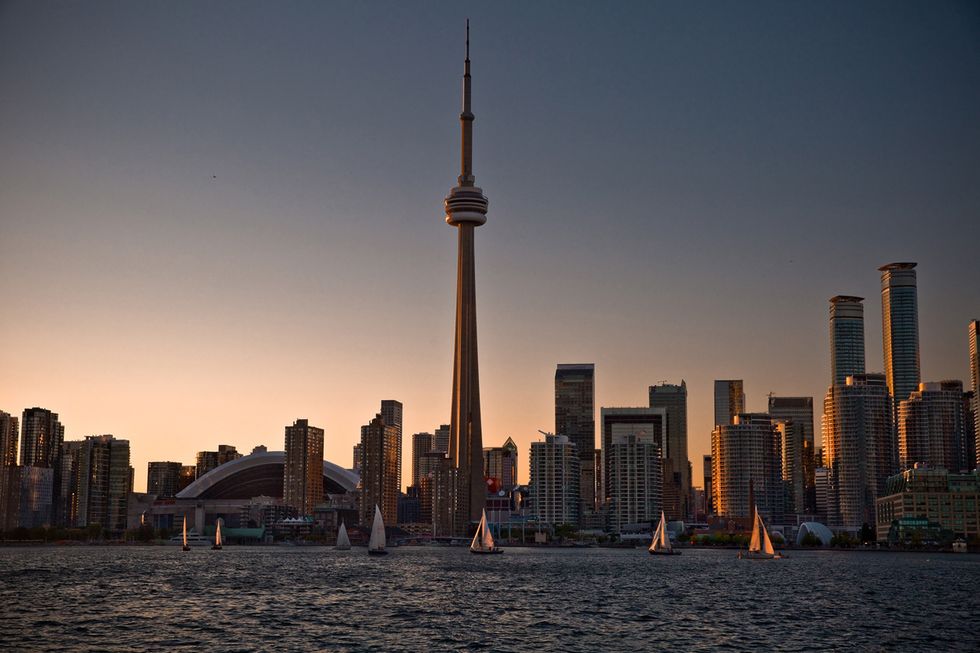 Where to stay To be at the heart of most of the attractions you’ll want to see, aim for downtown. One of the best options is the Marriott City Center, not only because it’s located right next to the CN Tower but also because it’s attached to the iconic Rogers Center where the Toronto Blue Jays play and countless concerts and popular events are held. 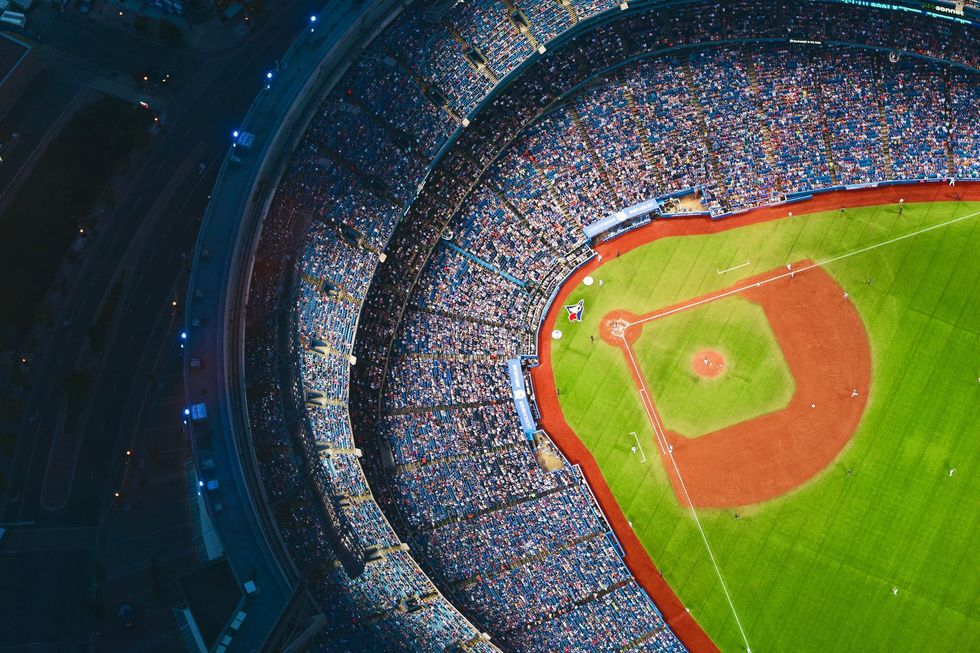 Opt for a Stadium room and you’ll look out onto the field. If you want to experience Toronto’s non-stop nightlife, the Entertainment District is the place to be. If you’re looking for a luxury experience, discover Canada’s first St. Regis hotel in the heart of downtown.

Where to eat and drink Nowhere is Toronto’s incredible diversity more evident than in its food scene — taste Toronto and you’re tasting the world. The city is brimming with restaurants and cafés serving everything from high-end fine dining to comfort food from an informal neighborhood joint — plus every option imaginable in between.

For fine dining, consider Alo, Canis and Edulis. Book a table at Canoe, Lavelle, The One Eighty or 360 at the CN Tower and you’re guaranteeing a view as spectacular as the food. Or experience the city’s remarkable fusion food at DaiLo (French-Cantonese), El Catrin (Mexican-French) and the unexpected mashup of Rasta Pasta (Jamaican-Italian).

The above suggestions don’t even scratch the surface of a food scene to rival any city on earth, with options to suit every taste and any budget.

How to get around Toronto is perfect to explore on foot or via a growing network of cycle routes. For a quicker journey, buy a Presto card to use the TTC, Toronto’s subway, streetcar and bus system.

How to get there Fly into Toronto Pearson International Airport (YYZ) with United and you’re around 15 miles west of the city center. The most comfortable route in is via the Union Pearson Express, which runs every 15 minutes and gets you downtown in 25 minutes ($13).The TTC is a cheaper option at under $5, but it can take an hour and a half and involves a number of transfers, while a taxi will take around 30 minutes and cost $45.

United flies to Toronto from numerous U.S. cities including our Hub city locations. Book your trip via united.com or by downloading the United app.