To celebrate Hispanic Heritage Month — recognized nationwide from September 15 to October 15 — we’re highlighting the extraordinary impact of Hispanic Americans on our nation, starting close to home with our more than 13,000 Hispanic colleagues at United.

As part of our festivities, we’re showcasing the stories of a few of our Hispanic employees, who were nominated by their colleagues as rock stars. In addition to their personal or professional achievements, these employees were selected because of the significant contributions they’ve made to United by going above and beyond to help our customers, their fellow colleagues, and the communities we serve, thrive. Whether donating their time volunteering for a worthy cause, leveraging their unique perspective to address a critical business challenge or helping foster an inclusive culture, they make United a better place to work. Let’s get to know them better here.

Captain Gabriel (Gabe) Vaisman, based in Houston, has been part of the United family for over 34 years. As a native of Argentina who immigrated to the U.S. with his family at a young age, Gabe faced multiple challenges during his school years, including financial struggles and learning a new language. However, with discipline and determination, and even working two jobs in high school, he was able to obtain his commercial pilot’s license and multi-engine rating at the age of 18. He quickly moved up the ladder and landed his first job at United in 1985, where he continued to move up and became a captain for our Boeing 737 fleet 22 years ago. When he is not busy flying customer to their destinations, you can find Gabe visiting children hospitals as part of his volunteering efforts with the Pilots For Kids organization in Houston. For the past 14 months, he has also served on the board of Lone Star College, acting as an advisor for their professional pilot degree program and inspiring a new generation of pilots. 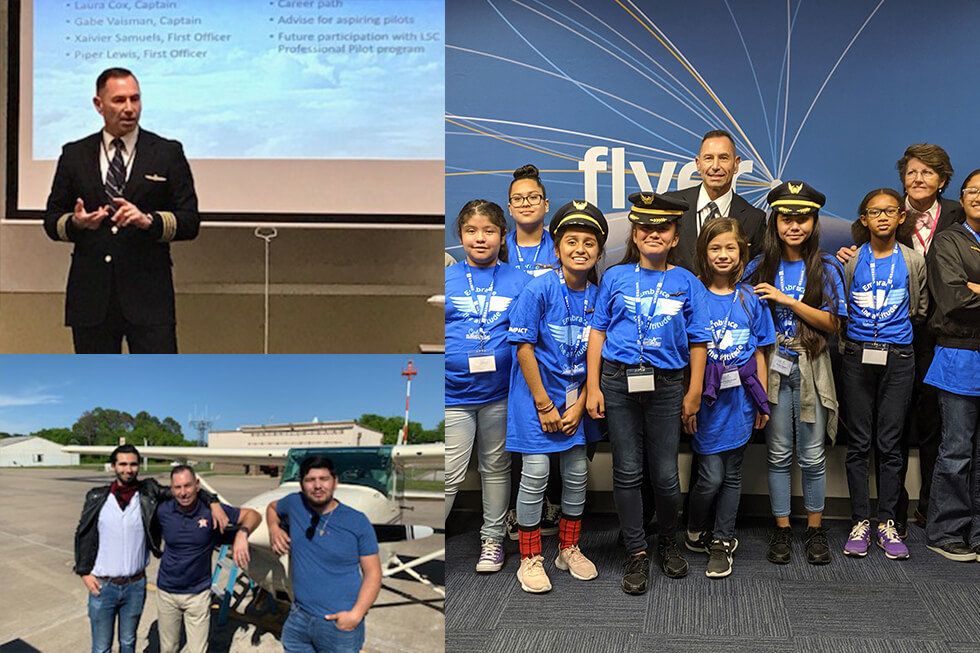 Gabe pictured at a lecture at Lone Star College (LSC), with LSC students, and at one of our recent events for Girls in Aviation Day.

“All the volunteer work I do has helped change one life at a time, and I hope that my career story inspires anyone who feels hopeless with no way out of their current situation. The message I always try to leave with young people is that no matter what career you choose, you will have to sacrifice time and maybe give up a few good times with your friends to accomplish what you are pursuing.”

The daughter of Bolivian immigrants, Vania earned her law degree from Harvard University and joined United’s legal department 20 years ago. Throughout the years, Vania Montero Wit has advanced to become one of the key leaders of United’s legal department as vice president and deputy general counsel. As one of the highest-ranking Latinas at United, Vania represents a crack in the glass ceiling for Hispanic women in corporate America. Despite the heavy demands of her job, Vania is very generous with her time, serving as executive sponsor for uIMPACT, a business resource group supporting women at United, and has given career advice to employees as a panelist for UNITE, United Airlines multi-cultural business resource group. She has made a positive impact in the community as Chair of the legal department’s Pro Bono and Community Service Committee, where she even took on and won an asylum case. Vania’s compassion for others and continued support of the company’s diversity-and-inclusion initiatives make her a role model for both Hispanics and non-Hispanics alike. 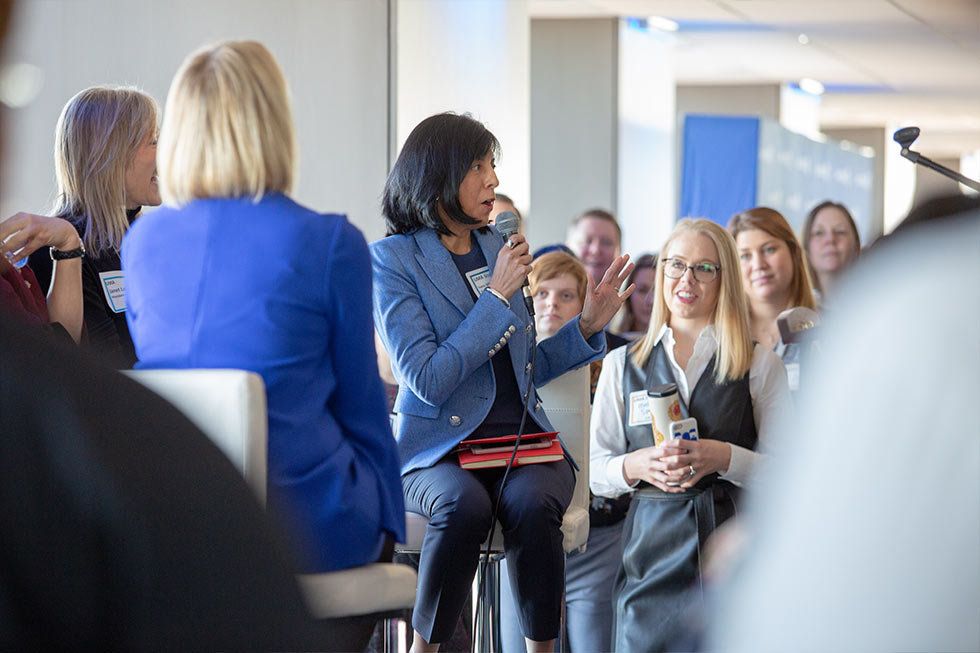 Vania (center) speaking at a leadership event at United.

“ As a working Latina woman, I strive to be a role model for any and all who are working in a corporate environment and struggling to find their voice or simply looking to make connections and expand their network. My long tenure at United has afforded me a range of experiences and teaching moments all of which I am happy to share with others.”

Katherine Gil Mejia is a human resources representative for United Ground Services in at New York/Newark. A native of the Dominican Republic who moved to the U.S. only 8 years ago, she joined United shortly after at the young age of 19. With her work ethic and drive, she quickly became a go-to-person for many departments offering assistance or guidance when needed. Katherine never hesitates to step in and translate for customers or colleagues that are struggling with a language barrier, and she does so while providing amazing customer service. Katherine’s knowledge of United — as well as her caring and friendly personality — have earned her the trust and respect of her colleagues. Katherine also has a passion for helping others, giving back, and making a difference in the community. She always offers to volunteer during United Airlines Fantasy Flights, and when she can, she also takes the time to bring Ben Flying bears to kids at hospitals. 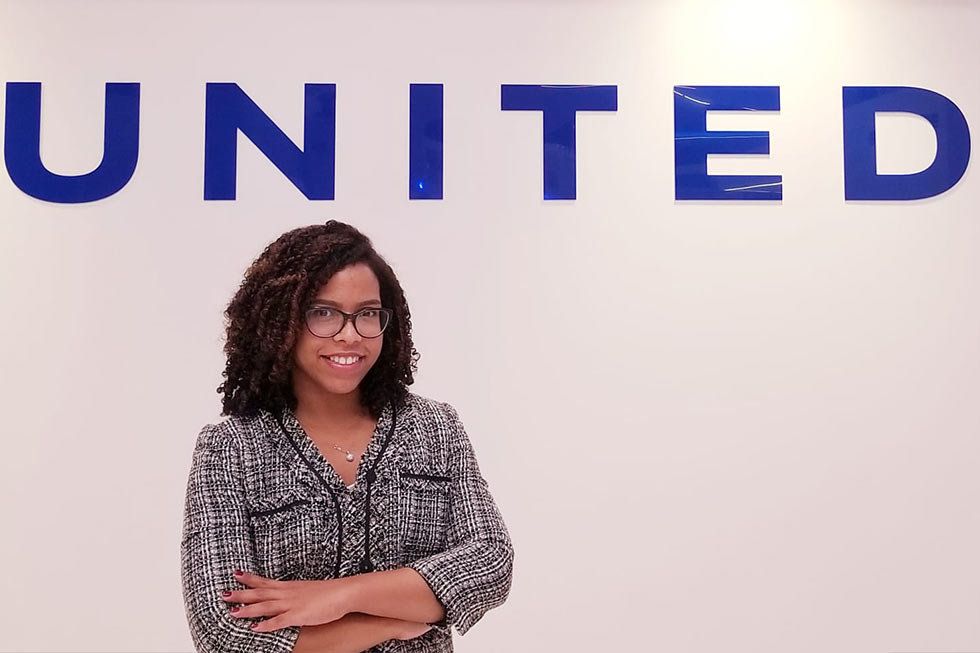 “I know the language barrier for some employees can play a role in potential miscommunication. I often put myself in their shoes and try to relate. My upbringing in Dominican Republic taught me to work and trust my neighbors, community and family. It was natural to bring that trust mentality into work with my colleagues and employees. I believe that is what makes me successful in HR.”

Antonio (Tony) Valentin has been working as a ramp service employee at Chicago O’Hare for three years. He’s earned the respect of his colleagues by going above and beyond and always stepping in to help both colleagues and customers alike. It’s not rare to find him around the terminal translating for Spanish-speaking customers and helping them find their ways to their gates. Tony’s caring personality shines beyond the airport in all the volunteering work he does in the local community, especially in the Chicago Humboldt Park area, and in the work he has done as lieutenant commander in the U.S. Coast Guard, including his deployment to Puerto Rico where he assisted with relief effort after Hurricane Maria. 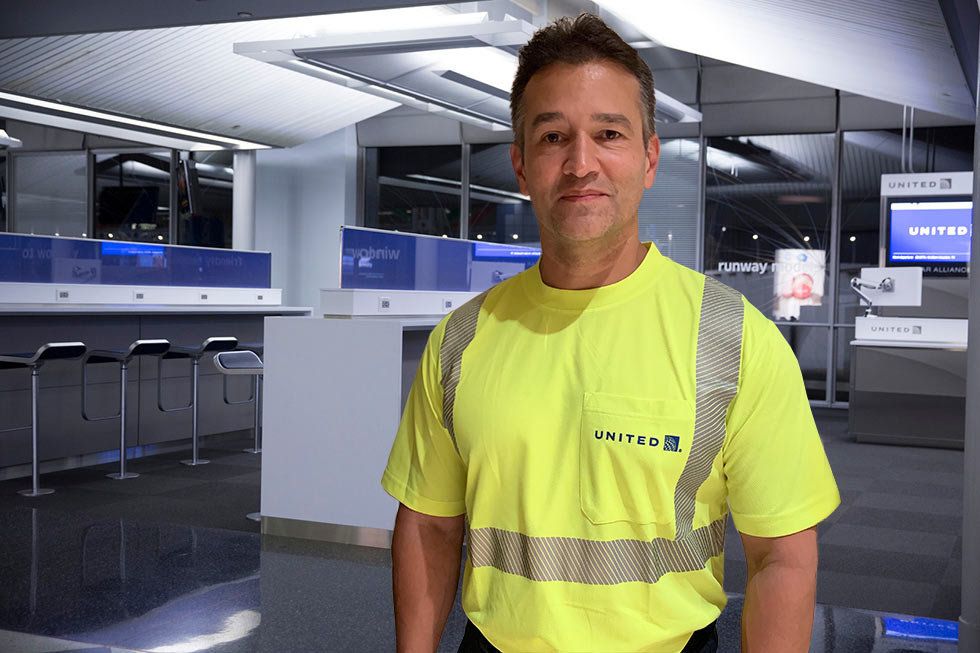 “I’ve always had a passion for helping people and I truly believe that being a good person is equal to being successful. As a prior educator, I am always encouraging members of RSE (ramp service employees) to return to school and to live their lives as lifelong learners.”

Sylvia Gomez is the daughter of Mexican immigrant parents that moved to the U.S. in 1960. At the age of 5, her family moved back to Mexico so they could build strong connections with their heritage and culture. They eventually returned to the U.S. in pursuit of a better education, as her father believed that education was the key to success. The move back to the U.S. was not easy, but it gave Sylvia the opportunity to understand two different cultures, which has been instrumental in her career. She recently celebrated 30 years at United, where she currently serves as managing director of IT Infrastructure Program Management. Sylvia has been making a mark in the company with her efforts to pass forward her experience and knowledge, and she spends a great amount of her time mentoring United employees. She is currently mentoring five young women, and she also makes sure to stay in touch with previous mentees to make sure they are still on a path toward success. She is also an active participant on the planning committee for a Women in Technology group and volunteers with Junior Achievement USA, mostly working with inner-city high school students. 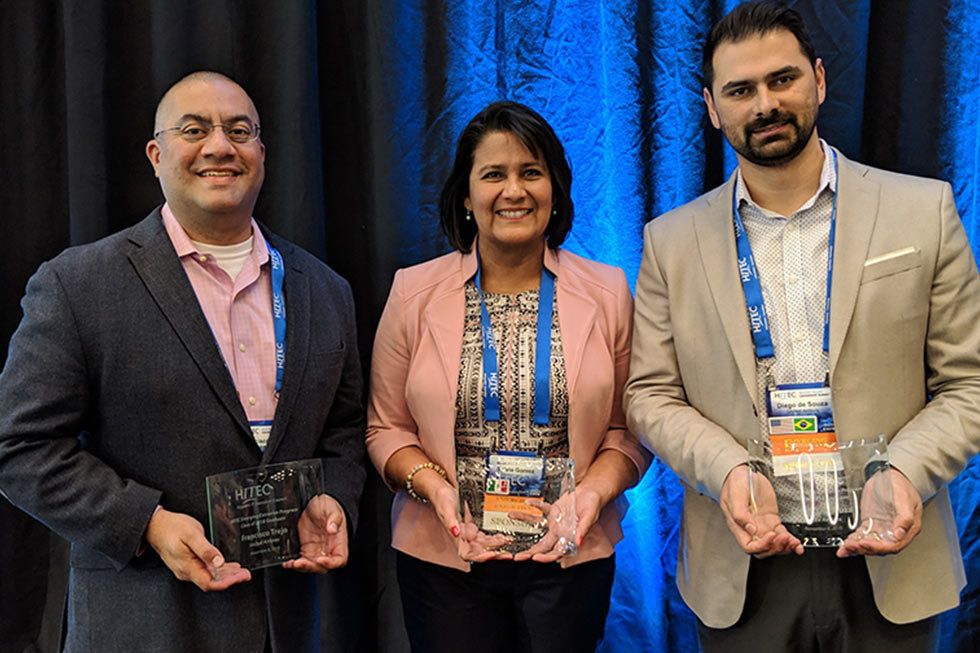 “Always look for people that have been there and learn from them. And, always look to see who you can help. Never underestimate the power of having people around you. Have the confidence to take risks and celebrate your successes.”

Carlos Palacio, a lead customer service representative in Houston, has been part of the United family for 20 years. When speaking to Carlos, you can clearly see how passionate he is about his job and about United, and embracing his Cuban heritage has been instrumental in delivering excellent customer service at the airport. He even takes extra time with Hispanic customers that cannot speak English, making sure they have all their travel documents and that they have all they need for their journeys. On his spare time, the new father often travels to Latin American countries like Colombia and Cuba to visit children’s hospitals and to donate schools supplies for children in need. Seeing the smiles of the little kids he helps keeps Carlos motivated and pushes him to continue his efforts to help others. 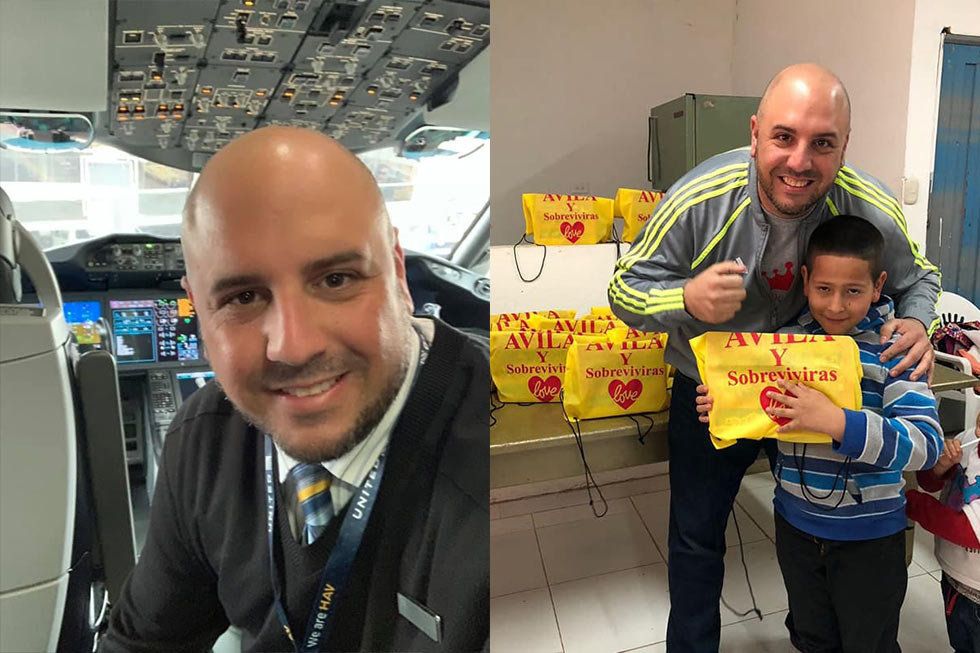 Carlos pictured in the cockpit of a United aircraft (left) as well as donating school supplies to children (right).

“I want young people to know that this is a great country … to go to school and make a career and pay attention to mom and dad who want the best for them, and one more thing, never forget we are all human. My culture is very fundamental in my job. I help people every day who need help in Spanish. Speaking Spanish at work helps many of our customers.”

Roberto Hernandez was born and raised in Puerto Rico. His passion for travel and customer service ultimately led him to the airline industry four years ago, when he joined United as a flight attendant. Roberto worked as a purser for a while, displaying excellent leadership skills and customer service. He now works as a base supervisor at New York/Newark and is also the local chapter director for EQUAL, a business resource group at United. In his role at EQUAL, Roberto has been focused on fostering diversity and inclusion at United, especially for the LGBTQ+ community. In fact, he recently played a great role organizing this year’s company celebration of Pride in New York and was there front and center representing our company in Pride Live’s Stonewall Day on World Pride. Roberto really values his heritage and culture, and is very proud of where he comes from, which is why he did not hesitate to help with the relief efforts in Puerto Rico after Hurricane Maria. 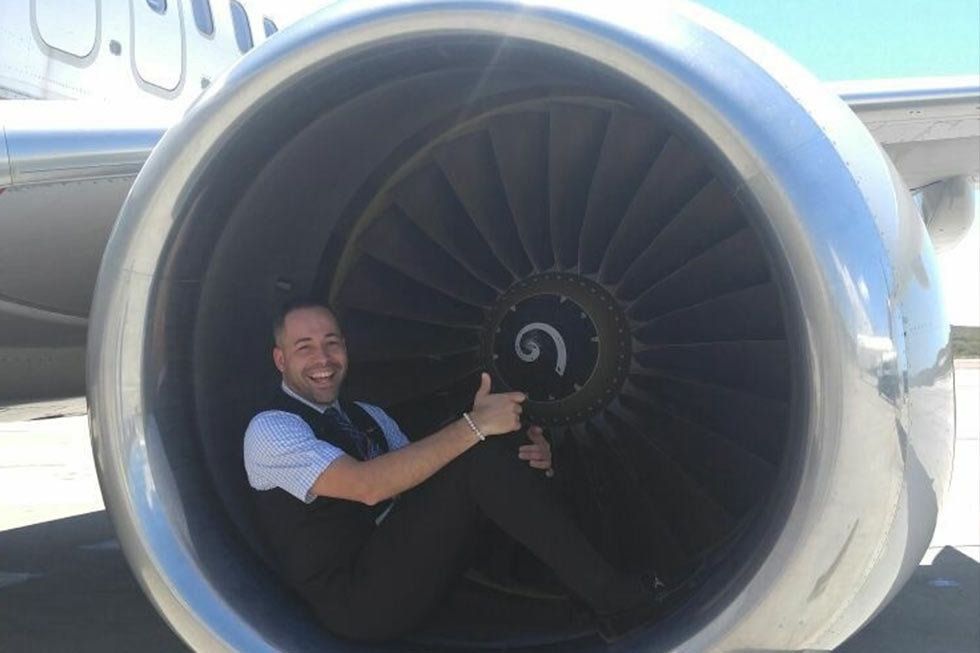 Roberto, posing in the engine of one of United’s aircraft.

“I bring my true, authentic self to work each day, ready to assist in whatever way I can. When I say ‘true, authentic self’ I mean the person I was raised to be. A kind, caring and patient individual who is ready to assist in any way I can. I think the most important piece is to respect each other and to learn from one another. Be proud of who you are, no matter where you’re from. We’re all different, but if we all integrate together we can make things happen. That’s what I love about United. We’re doing that.”

In their own distinct way, these rock stars exemplify the many ways our company is enriched by our differences and unique journeys. When we create an environment where people feel valued, this influences how we treat one another and our customers across the globe. In the words of our chief executive officer, Oscar Muñoz: “This month is also an opportunity for us to think about our efforts to build bridges between cultures and communicate authentically to all the communities we serve,” he said. “By becoming more culturally aware, we can be more effective ambassadors for United’s values around the world and embody them in the way we serve our customers and one another.”

We hope you’re as inspired by this group of dedicated, passionate and talented rock stars as we are.